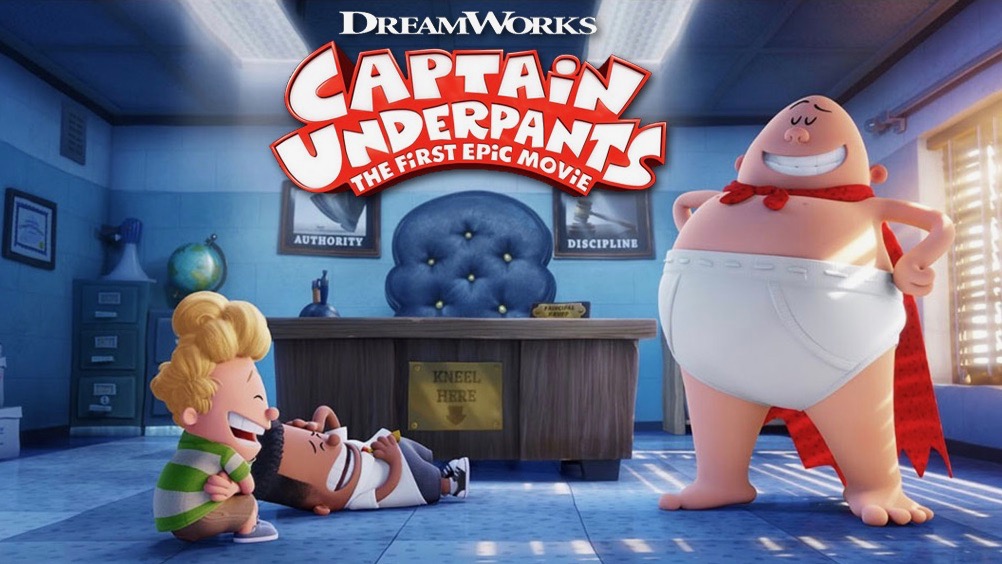 In case you’ve been living under a whoopee cushion somewhere, or found yourself in a 3-D-Hypno-Ring-induced trance, or simply don’t live with young kids who are totally into this sort of thing, we thought we should let you know…

That’s right, Captain Underpants: The First Epic Movie hit theaters this weekend, and our family was among the very first to check it out.

If you’ve read our article about why we should hate the Captain Underpants books but don’t, you already know that everyone in our house loves that big, bald, tighty-whitey-clad superhero. This includes:

Our kids have read all the books many times over, and have been eagerly anticipating seeing the stories come to life on the big screen for months now.

So did the movie delight us or disappoint us? Here’s what we all thought:

The whole movie was like a super fun, totally funny ride! There were lots of fart and potty humor jokes, which of course had our kids cracking up. But I think I laughed just as much as they did – maybe even more!

I dug the look of the movie. The main storyline took place in a slick, computer-generated animation style that looked like a brighter, shinier version of the drawings in the books. But every once in a while, they’d throw in some crazy sequence that looked completely different, like a scene featuring live-action sock puppets, or a battle sequence done in Flip-o-Rama style – which are these cool, multipage interactive things you can do in every Captain Underpants book.

Yeah, the Flip-o-Rama was my favorite part! It made you more excited to read the books.

The music in the movie was also pretty great. There’s a performance of the “1812 Overture” done almost entirely with farts. And the “Captain Underpants Theme Song” is recorded by one of my all-time favorite recording artists, “Weird Al” Yankovic.

And I loooved the song they played during the credits that goes, “Dude I love you, bro I love you, man I love you.” It’s really sweet. That’s why I made Andy buy the soundtrack before we even left the movie theater!

Kids, what did you think of the Captain Underpants movie?

I think I did not like it at all… (IMMEDIATELY BEAMS A HUGE, I’M-OBVIOUSLY-JOKING SMILE)

It made me poop my head off!

It made me fart my foot off!

It made me eat my dinner!

It made me poop my pants.

Okay, we get it. The movie got you in a super-crazy mood, and you just want to tell a bunch of poop jokes right now. But what else did you think about it?

It was different from all of the books!

Yeah, Principal Krupp was not in love, and all of the bad guys were not together in the books, but they were in the movie.

Cool. What were your favorite parts of the movie?

My favorite part was when George and Harold were on top of the toilet!

My favorite part was when they were trying to take away their laughter and their brains were talking to each other!

My favorite part was when Professor Poopypants said his full name IT WAS SO FUNNY!

My favorite part was when I was watching and I had to stretch my leg but I could not!

My favorite part was when I had to kick my head!

Okay guys. Thanks for your somewhat useful insights into the Captain Underpants movie.

Awwww! She could not be more adorable!

Has your family seen the Captain Underpants movie yet? What did you tinkle – we mean think – about it?

Why We Should Hate Captain Underpants … But Don’t