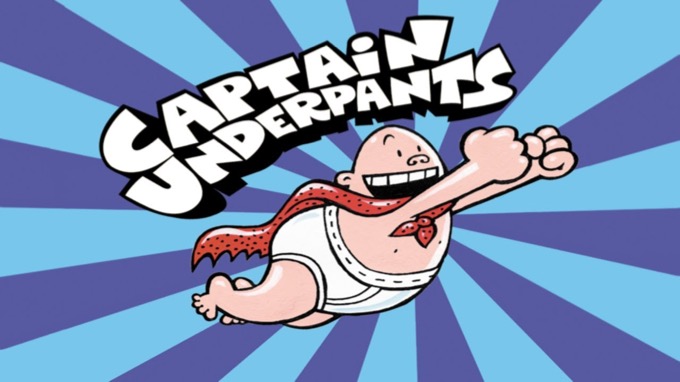 Violence. Profanity. And characters prancing around in their underwear.

Sounds like the ingredients of some R-rated movie that responsible parents like all of us would surely keep far away from our children, doesn’t it?

Well we don’t know how to break it to you, but it’s actually a description of Captain Underpants, a series of twelve children’s novels by author Dav Pilkey…which our family just can’t get enough of.

The books center around the exploits of George and Harold, two fourth-grade kids with a lot of creativity and a real talent for getting in trouble at school. They write comic books about a make-believe, tighty-whitey-clad superhero named Captain Underpants, and then ***SPOILER ALERT*** accidentally transform their school principal into a real-life version of the guy!

Sounds like a lot of fun, right? It really is.

But some people also find it really, really offensive too. So offensive, in fact, that Captain Underpants actually topped the American Library Association’s list of most banned books in both 2012 and 2013!

And we get why that happened. After all, there are lots of reasons that parents really should hate Captain Underpants books:

1. They’re riddled with bad examples of spelling and grammar

We sometimes cringe at the abundance and egregiousness of these errors, and we can’t help but correct at least some of the awful syntax when we read the books to our kids. But because the errors only appear in the portions of the book containing homemade comics written by fourth graders, they actually make sense in the context of the story. So while the Captain Underpants books won’t always help your kids learn proper language, they could help kids comprehend text written from multiple perspectives – and inspire them to create their own stories like George and Harold do, which would be pretty kewl.

There’s no getting around it: since Captain Underpants is a superhero, he’s always fighting bad guys, resulting in loads of violence. While we don’t necessarily love this, we also feel like the type of violence contained in Captain Underpants books is usually far more innocent than the antics of other popular superheroes – like Batman, Superman, Spiderman, Teenage Mutant Ninja Turtles and the like. Although the characters sometimes assault evil robots with 2x4s, sling underpants at bad guys or blast each other with contraptions like the Diaper-Matic 2000, a lack of realistic weapons and Pilkey’s playful pencil drawings make these scenes seem more silly than serious. Plus, the violence is often depicted in clever “Flip-O-Rama” form, which allows your kid to flip the page back and forth, making the pictures appear to almost move. Talk about creative inspiration for kids! Since discovering Captain Underpants, our kids have busted out the art supplies and created several of their own Flip-O-Ramas. And writing and creating is always applauded around here.

3. They use bad words

Ok, so there are no real bad words. Captain Underpants never drops an F-bomb. But the books do contain lots of stuff we don’t want our kids to say, like “stupid,” “dumb,” “nerd” and “shut up.” When we initially read the stories together and these kinds of words came up, we used them as a springboard for conversation, discussing what the words mean, communicating our family standards to not use them and discussing nicer ways to say things. And so far, our kids haven’t repeated any of the “bad” words – at least in front of us. (Knock on this stupid table.) But for each not-so-good word in the books, there are plenty of complex vocabulary words to balance them out. Pilkey never hesitates to use a big word when appropriate, so your kids can learn words like “responsible,” “despair,” “justice” and “blackmail” while they read.

4. Kids are constantly challenging the authority of adults

Much of the stories take place at George and Harold’s elementary school, where teachers, school administrators and the principal are often portrayed as bumbling, brutal and basically brainless. Of course, you wouldn’t want your own kid treating his teacher like George and Harold regard theirs. But why would your child? His teacher would never go on a wedgie rampage and try to destroy the world…right?

Poop, boogers and farts, oh my! There are a full dozen Captain Underpants books and somehow Pilkey never runs out of potty humor! Fearing that their kids will start telling fart jokes at the dinner table, some parents are really put off by the sheer amount of gross talk contained in the series. But not us. As you know, we love to share jokes as a family for their entertainment and developmental value, and a good fart joke is always guaranteed to get a laugh around here! (Sorry, Grandma.)

But despite all of these reasons that we probably shouldn’t, there’s one big reason that our family absolutely loves Captain Underpants anyway:

OUR KIDS LOVE IT! 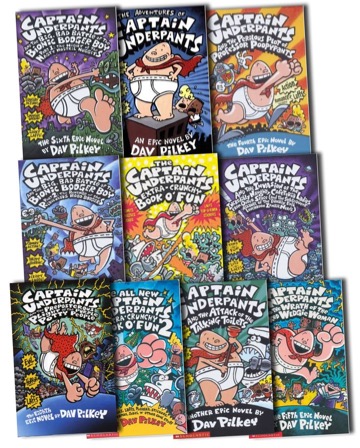 Ever since our three-year-old first laid eyes on that brave, bald, briefs-wearing oddball, he’s been obsessed. He’s devoured all twelve of the Captain Underpants books, plus each spinoff series. Now he’s moved on to any Dav Pilkey book he can possibly find. He asks to go to the library daily. Sometimes more. He insists on dressing like Captain Underpants basically every minute he’s in the house. And when he leaves home – and is therefore forced to wear clothes – he insists on being called Mr. Krupp (Captain Underpants’ fully clothed alter ego). Our daughter loves the books too. In fact, she’s the one who reads most of them to our son. The two kids wake up every morning and read the captain cuddling on the couch. Our son looks forward to our daughter’s return from kindergarten each day so they can read some more in the afternoon. And finally they finish the day with an underpants nightcap. These kids can’t get enough.

And that’s what exactly what we want. Captain Underpants is helping us to raise joyful, ravenous readers. So we just can’t be haters.