This question wasn’t technically submitted to us, but rather to anyone who happened to see it posted on Facebook over this past weekend. But because it covers such an important issue for parents, we thought we’d go ahead and chime in about it anyway. 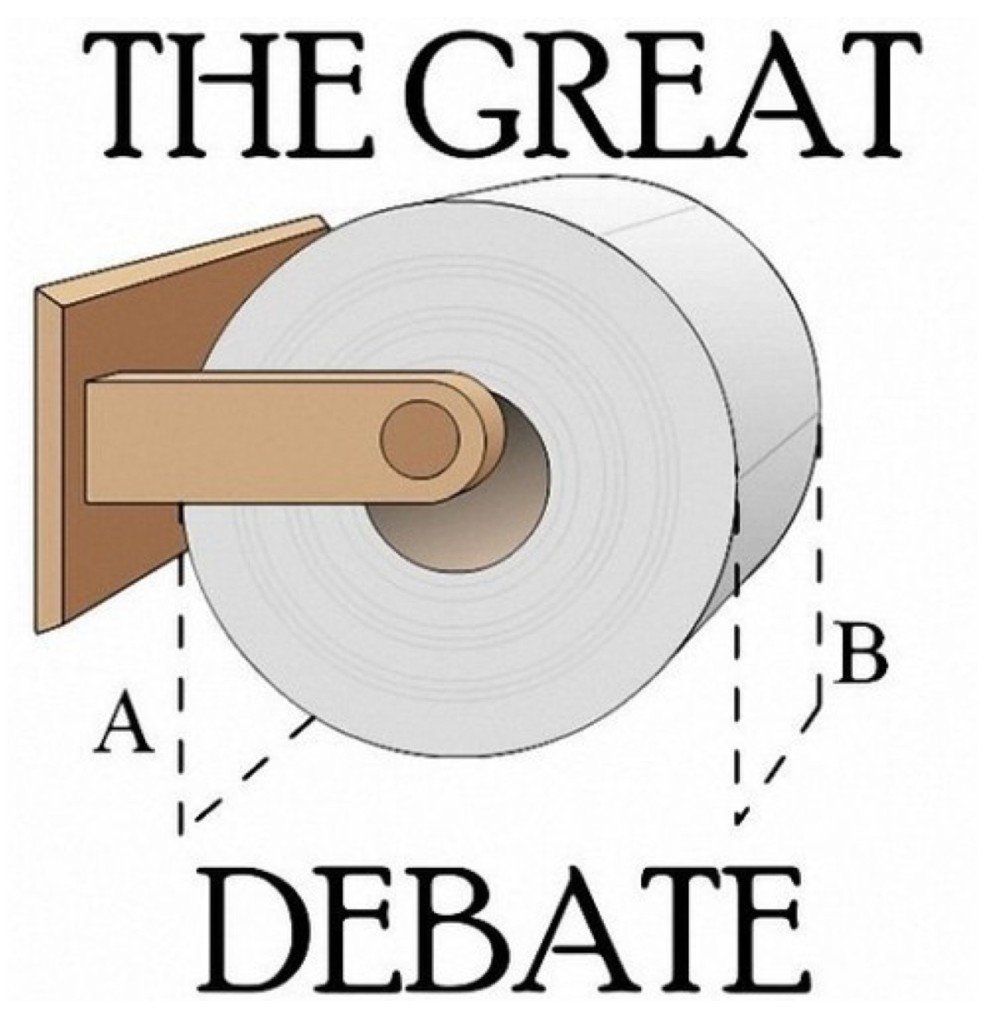 The question of whether one ought to hang toilet paper so that it goes over or under the dispenser has been debated ever since the very first roll of TP was hung way back in the late 1880s (side note: it was hung the wrong way, according to the wife of the guy who did it). Yet to our knowledge, in all that time, there have shockingly been NO scientifically conducted, peer-reviewed academic research studies published on the subject.

So the Doctor and the Dad were forced to take this “bath tissue issue” into our own hands.

After exhaustive independent research, we determined that despite a widespread belief that toilet paper hanging methods are a matter of personal preference, for parents of young children looking to avoid some toddler-induced two-ply messes, there is an objectively correct answer!

If you’re still measuring your child’s age in weeks instead of years, the kid probably hasn’t developed enough manual dexterity yet to be able to grab onto – and pull – low-hanging sheets of toilet paper very easily. But your little one is perfectly capable of batting at the top of the roll with very little effort. If you’ve chosen the “under” method (Figures 1.1 and 1.2), this batting will cause the paper to just roll itself back up, with no harm done. But if you’ve opted for the “over” method (Figure 2), you can expect to find a big pile of paper on the floor every time you head to the potty. Because of this, the “under” technique is clearly the new parent’s best bet.

Of course, this small bit of happiness must someday come to an end (much like spontaneously going out, having sex or watching non-animated TV already have). At about eight or nine months of age, your kid will start mastering the “pincer grasp” – the ability of the thumb and forefinger to meet and form a circle. At this point, that roll’s unraveling no matter which way it’s hung.

So if you do have small kids, do yourself a favor and put the toilet paper in position A.

If you don’t have small kids, stop reading this thing and go clubbing already.

Ask D+D: Why is your baby crawling like an MMA fighter?

How do you get a kid to stop picking his nose?

This is also a well known fact for all cat owners.

[…] noticed that this video also reveals where Will’s family weighs in on the Great Toilet Paper Debate, for those of you who are still keeping score. […]