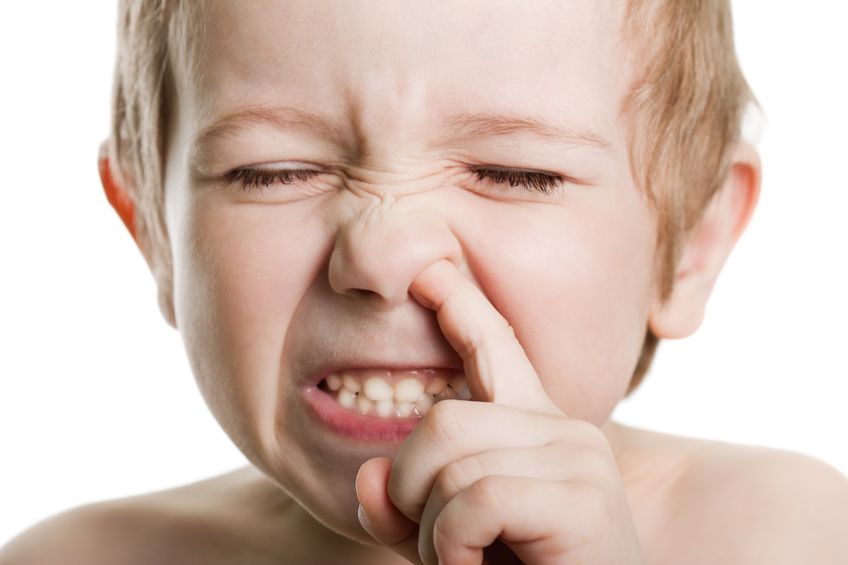 My sister’s 9-year-old has a pesky habit of picking his nose…when bored, nervous, talking to people, YOU NAME IT! Obviously, my sister is embarrassed because she will be talking to her friends and her child will start “picking away.” She heard from THE Internet that he “must be orally fixated,” which sounds like some Freudian mumbo jumbo to me. Any experience with (gross) habits of children and how best to behaviorally change them???
– Ryan

Well, Ryan since we luckily haven’t had to deal with much nose-picking in our own home, we decided to dig deep into the research to answer your question.

Like seriously, three knuckles deep. And here’s what we found.

Despite the fact that nose picking is pretty much unanimously accepted as gross, it’s also extremely common. One study reported that a whopping 91% of the adults that responded to their questionnaire admit to some level of nose-picking. If that number sounds too high to you, check out your neighboring drivers next time you’re stuck in bumper-to-bumper traffic, and see how your research compares.

So if that many adults admit to bobbing for boogers, it naturally follows that nose-picking is pretty prevalent in kids too.

Because habitual nose picking is so common, it doesn’t usually qualify as a psychological problem. So you can probably tell your sister to stop worrying about fixations and chronic syndromes right away.

But if you still want to help this kid kick his picking habit, there are a few things you can do:

Increase His Awareness of the Problem

Not in a mean or shaming way, like yelling at him about his disgusting, snot-covered fingers in a crowded restaurant. After all, that probably won’t prevent the picking – it’ll just make him want to pick a fight with you.

Instead, you can try talking to him about how you’ve noticed his nose-picking, and asking him to think about whether there are certain situations that make him want to do it more. For some people, boring or sedentary activities (like watching TV, using the computer or waiting at a traffic light) make them more likely to pick. For others, heightened stress or anxiety might bring out the problem.

Being aware of when the schnoz spelunking is likely to occur might help him be more conscious of it and better able to resist the urge.

Try helping him want to change the behavior. One way to do this is by talking about or even writing down an actual list of the drawbacks to nose picking.

For a 9-year-old, that might include gunked-up video game controllers.

For a 12-year-old, he should know now that snot surfing is certain to hurt his chances of ever scoring a date.

Help him figure out something else he might do when the urge to pick sets in. Encourage him to notice when he feels the need to bring his finger to his nose, and then do something different instead, like clenching his fists, sitting on his hands, squeezing the arm of his chair, or coolly running his fingers through his hair.

Stock Up On Supplies

Make sure your little attempted brain scratcher drinks plenty of water. Because an uncomfortable nose can lead to more digging, drinking lots of water is one easy way to keep nasal passages from getting dry and itchy.

Have tissues handy around the house and plant some in his backpack. Teach him that messing around with your nose is at least a lot more polite when a tissue is involved – and if you see him picking, offer one as a gentle hint.

Some people have reported that wearing Band-Aids or other reminders on their picking fingers can help them remember not to put them in their noses.

That worked for Johnny Depp

Kids usually respond better when you offer them lots of encouragement in their efforts to quit, and when you provide positive feedback any time you notice improvement.

Saying, “I’m proud of you for not eating your boogers this time,” can really go a long way.

Finally, if all else fails, just try letting the little beak burrower be.

Sometimes kids may pick more just to get your attention or even to get under your skin. Plus, it turns out that nose-picking tends to naturally decline between the ages of 6 and 12 anyway.

So in this case, peer pressure might actually do something good for your kid. As he gets closer and closer to adolescence, not grossing out his friends and potential romantic interests becomes pretty darn important to him.

Which might be exactly what he needs to “shake off” his nose-picking habit!

Ask D+D: Is my child regressing?

One reply on “How do you get a kid to stop picking his nose?”