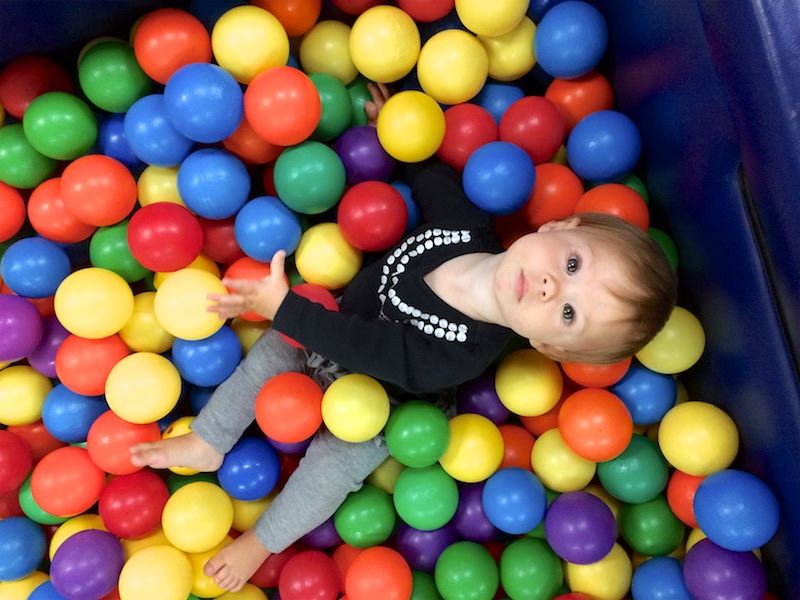 Hey, you. Yes, you. The Overly Competitive Mom I saw at the children’s play place the other day.

Remember me? I’m That Other Mom who was there all by herself, watching her kids. Well, technically I wasn’t so much “watching” as I was “frantically chasing” my 12-month-old daughter, trying to make sure she didn’t fall flat on her face or stumble directly into the path of some other gleefully reckless child.

Remember my daughter? You noticed her because she was so tiny, yet already running and climbing all over the place. She apparently made a big impression on you, because as we were playing right next to you, you started comparing my daughter’s motor skills to those of your own child. Specifically, you and your friend discussed how small my daughter was to already be walking, and how you considered your own children to be late walkers.

At first the conversation was nothing more than pointless milestone comparing, until you dropped this bomb: “It’s okay, because I read somewhere that children who walk later have better executive functioning.”

Come on. You and I both know that what you just said basically equates to: “This baby may have walked sooner, but mine will be smarter.”

Are you serious? Even if you did read that somewhere, to bust it out as I’m standing right next to you, quietly watching my adorable early walker, is just plain rude.

Did you think I wouldn’t understand what executive function was? Because I do.

Did you think I couldn’t hear you? Because that would be impossible, since I was approximately one foot away from you.

Did you just not care that you were being so obviously rude? Your friend did, as she awkwardly avoided responding to your comment due to her basic sense of decency. I’m guessing you forgot yours at home along with your baby wipes or whatever other of the umpteen children’s supplies we parents have to somehow keep track of.

But this wasn’t just some mindless, meaningless mistake. It was a conscious show of competitive parenting. It was comparing our kids’ milestones like they’re scores on a test and then assigning value to our kids and each other based on the grades you think we’ve earned.

But this wasn’t just some mindless, meaningless mistake. It was a conscious show of competitive parenting.

And honestly, it hurt my feelings. It got in my head. I thought about it for far too long afterward, and it didn’t feel good.

But after all that ruminating, Overly Competitive Mom, I think I now have some idea where you were coming from. I think you were watching your kid play, wanting the absolute best for her, and couldn’t help feeling insecure when you perceived a possible disadvantage.

I get it. We all feel that way sometimes.

You know what though? There are two major reasons that neither one of us really needs to worry about it:

Because it’s immensely important to remember that kids are kids – and they are far too special and unique to define in terms of averages.

The exact moment that our kids meet milestones doesn’t really mean much. It doesn’t matter for our kids, since most children eventually get to the same place regardless of whether they do so a little earlier or later than average. And it certainly doesn’t say anything about our parenting skills. The fact that my daughter walked early doesn’t mean that I’m totally killing it as a mom (maybe just that I’m having to kill myself trying to keep up with her sooner). And your kid walking a little later doesn’t mean that you’re doing anything wrong.

We are all just parents, trying to do our best.

So let’s please stop throwing our children’s differences in each other’s faces, Overly Competitive Mom. Let’s quit with all the silly competition, and simply try to do a better job supporting each other during this adorable, elating and totally exhausting time in our lives.

Like next time you need some baby wipes, just let me know. I’ve got you covered.

Is my kid becoming too competitive?

Ask D+D: Why is your baby crawling funny?

3 thoughts on “An Open Letter to an Overly Competitive Mom”