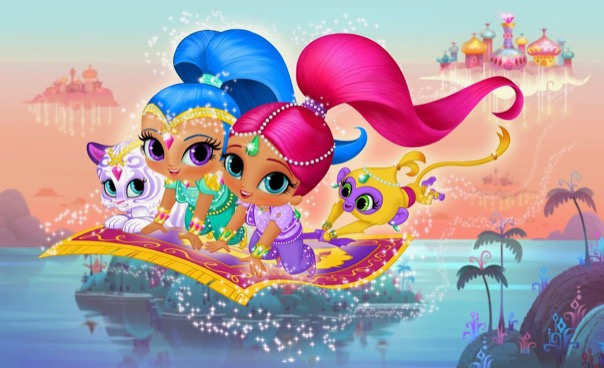 Our initial thoughts about the show were:

“Oh no, not another show to watch.”

“The music in this thing is excruciating.”

“Why are these animated prepubescent genie children wearing so much makeup?”

But after overhearing enough fragments of the show ourselves – despite our conscious efforts to block them out – we realized that the show communicates at least one unique lesson that might make our kids’ screen time somewhat worthwhile.

Shimmer and Shine is about a lucky/ridiculously spoiled little girl who somehow gets to cash in three wishes per day from two adorable genies.

So whether she’s trying to make cupcakes, build a tree house or find a lost treasure, she can always call on her genies when things get tough. But problems arise when the naïve genies inevitably take the girl’s wishes much too literally.

We can imagine how the Shimmer and Shine pitch over at Nick Jr. headquarters must have went:

What’s special about the show is that every time the genies inevitably make a mistake in fulfilling a wish, they celebrate it. There’s even an excruciatingly catchy song about it: “When we make a big mistake, don’t fret – let’s celebrate!” Because making a mistake means that the genies get to try again and do better next time.

Celebrating mistakes may sound counterintuitive, but we actually think it’s a great lesson for kids.

If kids don’t mind making mistakes, they’ll be more willing to try new things – and to persist even when things get hard. And those qualities are really important for achieving success in many areas of life.

For example, when learning something new (like gymnastics, ceramics or physics), kids who understand the value of effort and who can tolerate their own mistakes will be better equipped to overcome obstacles and achieve greater mastery of the new skill.

And it can be a great lesson for us parents, too.

We want our kids to be so successful that sometimes we don’t tolerate our children’s mistakes so well. Shimmer and Shine reminds us that a lack of perfection is totally okay – and sometimes even the most fun part!

Why ‘Shimmer and Shine’ just kind of sucks now

Good column. Reminds me of a golf pro giving us lessons on a putting green. He related how, when adults missed a putt, they would grumble and gripe. When youngsters would miss, they would exclaim, “Wow ! That was close !”

[…] back, we wrote a review of a Nick Jr. cartoon called Shimmer and Shine. The article was titled “Why ‘Shimmer and Shine’ is not the worst kids TV show ever” – and we meant every single word of […]