So your little ones want to play a board game, but you’d rather not expose them to the high fructose corn syrup fantasy world perpetuated by Candy Land, or to Trouble’s sexually suggestive “Pop-O-Matic” bubble? We’ve all been there.

Thankfully, here’s a game you can let your kids play that will keep their souls innocent – yet give their math skills some serious experience. 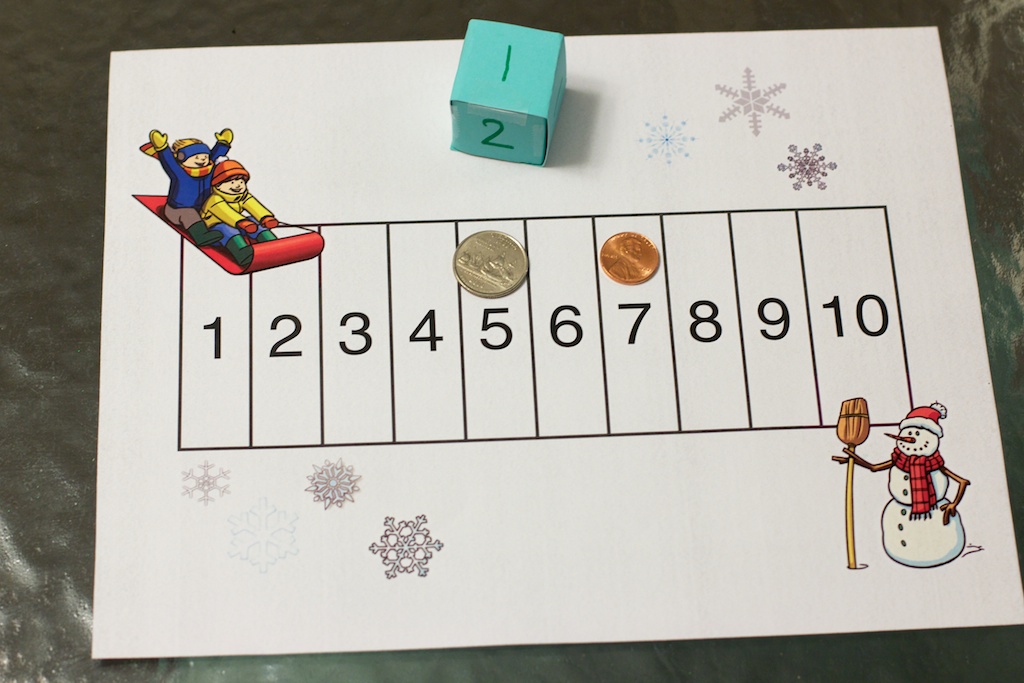 Who It’s For: Kids ages 2–5
What They’ll Learn: Number knowledge, numeral recognition, early math skills
What You Need: Game board (print out our winter themed one or make your own), a block with three sides marked “1” and three sides marked “2” OR a spinner with regions marked “1” and “2,” coins or small objects to use as game pieces for each player
How To Play:
– Take turns rolling (or spinning), then moving your game piece the number of spaces shown.
– As you move your game piece, call out the number of each space that you land on. For example, if you’re on space #3 and roll a two, you’ll call out “4!” and “5!”
– The player that gets to #10 first wins!

This super simple game was created by child development researchers studying the effect of game play on kids’ number knowledge. The researchers found that preschool-aged kids who played this game for four 15-minute sessions over a period of two weeks (for a total of only one hour of game play) had measurable gains in the following number skills:

These benefits stayed with kids long term, persisting for at least the several weeks that the study lasted. Plus these skills are really important, because children’s early number skills are related to later math achievement in school!

Another great thing about this game is that you can easily draw up a game board and play using stuff around the house. Give your game board any theme you want – seasons, holidays, animals – or you can buy a game that provides the same kind of number line experience. Chutes and Ladders, for example, can teach kids about number – plus its numbered squares go all the way up to 100!

Of course, climbing up all those tall ladders and speeding down all those crazy chutes will probably turn your kids into thrill-seeking, death-defying adrenaline junkies.

But we gotta’ let ‘em grow up sometime, huh?

Playtime! Activity: Play With Your Food

One reply on “Playtime! Activity: Add ‘Em Up”

If you desire to grow your familiarity only
keep visiting this website and be updated with the latest news posted
here.