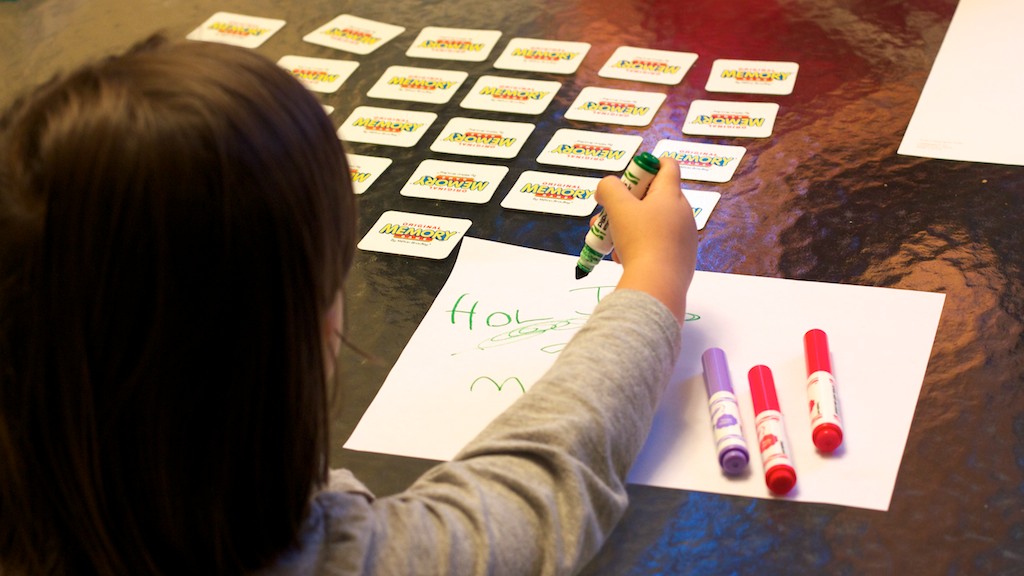 Who It’s For: Kids ages 3–10
What They’ll Learn: Memory techniques, symbol use
What You Need: A standard “Memory” game featuring pairs of cards with matching pictures on them, some paper, and your kid’s favorite writing instrument

Playing memory games with your kid is a pretty brain-friendly activity to begin with. But when you add a pencil and paper to the mix, you can learn even more about how your little one thinks – plus end up with an adorable keepsake from the experience too!

Here’s how to do it.

Set up the memory game like you normally would, shuffling the cards and laying them out in rows. But before you start taking turns flipping over cards to look for matches, give your child paper and something to write with, and tell her that she can use them to write down whatever she wants to help her during the game. Pictures, words, lyrics to her favorite Ke$ha song – anything that she thinks will help her remember the location of the cards so that she can find matches more easily.

But here’s what your kid doesn’t realize:

We don’t really care about helping her in the game. We just want to check those notes out to get a glimpse into how our kid’s brain is working!

After the game is over, take a gander at what your youngster scribbled down. “Good” notes – those which would actually help gameplay performance – require that kids use symbols that are truly useful in helping them remember card locations. For example, you might draw a grid that resembles the layout of the cards, then write notes on that grid for each card you see – for the card with the flower on it, you would draw a picture that looks like a flower, or maybe just the letter F (which of course would not help you if the flower card was right next to the Fabio one).

At first, young kids will be hopeless at this. Their notes will probably look like random drawings that have nothing to do with the game. They may even become so interested in the activity of drawing that they forget about playing the game altogether.

But as kids get older, the connection between their notes and the game will become increasingly more obvious and their notes will become much more useful in helping them win.

Researchers who did this study found that children made tremendous strides in their ability to make helpful notes between the first and seventh grades, so look for changes to start happening in those years. Interestingly, older kids eventually get so good at using notes that they actually rely on them to relieve some of the memory load. If you take away an older child’s notes mid-game, she’ll be hopeless at remembering where matches are because she’s so effectively using the notes to tell her. Kind of like how you’d be completely incapable of calling your own mother if you didn’t have your phone to remember her number for you.

Do this activity repeatedly over time to observe how your child’s skills in memory and symbol use develop. You can even keep her old notes for comparison!

Unless, of course, you forget to. In which case, you really ought to write yourself a note next time.

How to make your child an Action Movie Kid