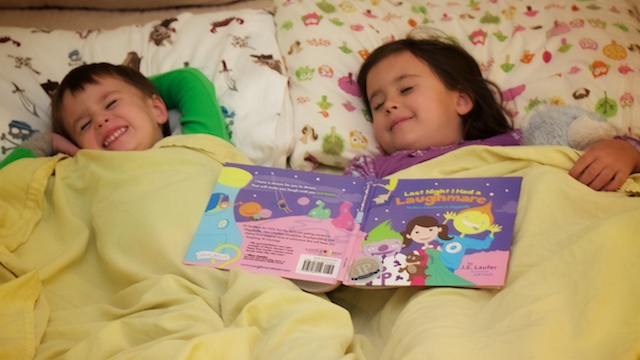 We’re reviewing gifts this holiday season! We’ve already told you about the best and second best gifts for parents ever, and now we’ve got a one for the kids in your life. Last Night I Had a Laughmare, written by J.E. Laufer and illustrated by Jeff Yesh, is a whimsical, rhyming story about a fantastical land called “Gigglyville.”

Laufer was inspired to write the book when she woke up one morning laughing in her sleep. She called it a “laughmare” and created a dreamland that would leave kids laughing too.

Our family has visited Gigglyville many times now, and here’s what we each had to say about the book:

As someone who has actually woken up to the delightful feeling of laughing in her sleep, I love the idea of giving my kids that experience too.

It’s a huge bummer for everybody when kids have bad dreams or negative thoughts that keep them from falling asleep. So it’s fun to have a story specifically for warding those away.

It reminds me of a relatively new part of our bedtime routine. To help our kids focus on happy thoughts after the lights go out, we’ve been telling them “a story to think about” as the last thing we do before bed.

We ask them to picture themselves in a familiar place, and then imagine meeting some friendly magical creatures like mermaids or fairies. The creatures always invite the kids to go on a fun adventure with them, so we ask the kids to imagine what they would look like as a mer-person or fairy. The idea is that after we’ve tucked our kids into bed and left the room, they will continue to think about these happy thoughts (instead of some scary ones that might have them screaming for us in five minutes).

This book lets us mix up our routine by inviting the kids to think about strolling through Gigglyville as they fall asleep now too!

I do have one small beef with this book. Like many kids books, Last Night I Had a Laughmare is structured like a big, rhyming poem.

And since I once wrote 365 poems about onion bagels in 365 days, I know a thing or two about poetry.

So it bugged me – probably more than it would most people – that some of the meter was inconsistent. In this humble onion bagel poet’s opinion, some lines could’ve used an extra syllable or two, while others maybe had one syllable too many.

But go figure – none of this seemed to bother our zero-, three- or five-year-old children one bit. And their opinion is the one that matters most!

We’re not exactly sure what it is about this book, but our kids freaking love it!

From the very first time we read it together, they were totally into all the silly pictures (like shoelaces made out of spaghetti and upside-down houses), as well as the crazy characters (like Onion Breath, Liverlips, Smellyfeet, PurplePudding and Dishes – who apparently got his name because he likes to carry a stack of dishes, BTW).

Our three-year-old son likes to repeat and extend the rhymes, which the Doctor loves, since learning about rhymes and other word sounds is an important precursor to reading!

And we’re pretty sure that even our five-month-old baby girl likes the book too. Every time we read it, she grunts a lot and tries to grab the pages and put them in her mouth. Of course she does that with everything these days, so it’s hard to tell…

All in all, Last Night I Had a Laughmare has proven to be a real kid-pleaser in our house – at bedtime, other times or anytime our kiddos are looking for a laugh!

Read a free chapter from ‘Think Like a Baby’