Kids say the darnedest things. And when they’re still little, they usually say the most poorly enunciated things too. 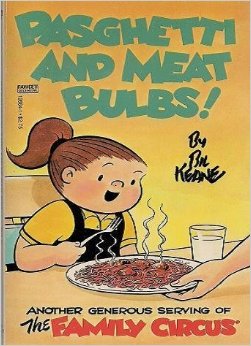 The guy who wrote all those Family Circus comic strips back in the day made his entire living off this fact. Pasghetti and meat bulbs? Sounds like the perfect punch line to me!

But sometimes parents get a little stressed when their young kids mispronounce the words they’re trying to say, thinking that these errors are abnormal or that they might be warning signs of a permanent speech impediment.

If that sounds like you, you can probably relax. Odds are, you have nothing to worry about.

The fact is that mispronouncing words is a normal part of speech development. And kids don’t typically master all of the sounds of language until they’re about eight or nine years old, so it’s extremely common for your child’s speech to sound way less than perfect at least until this age.

Plus some sounds are harder to produce than others. Check out this chart to see the average age ranges for when kids usually start to say specific English sounds: 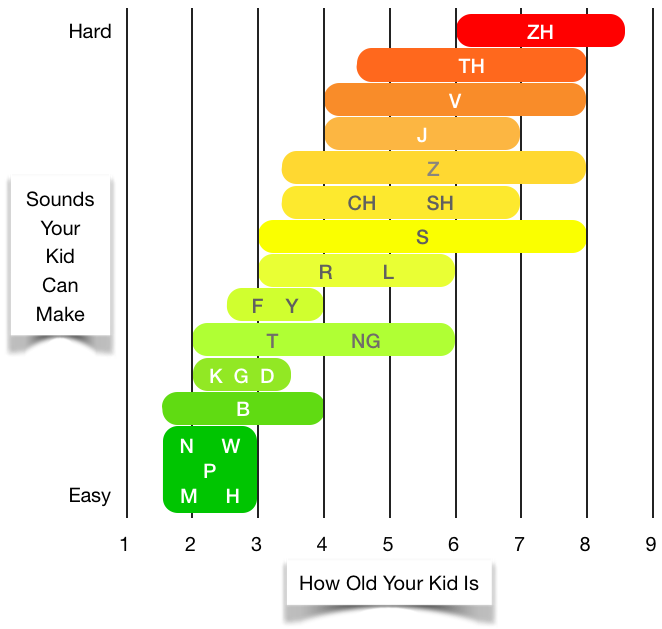 As you can see, kids shouldn’t be expected to master quite a few sounds until around the second grade. And not coincidentally, it’s common for some early speech problems – like lisping, stuttering and general difficulty with pronouncing specific sounds – to spontaneously resolve themselves around the same time. If you’re still concerned about your child’s speech though, be sure to consult your pediatrician. (Or as a Family Circus kid might say, your peely-old-mitten.)

Once you feel comfortable with the idea that your kid mispronouncing words is totally normal, we encourage you to stop fretting about it, and to start enjoying how gosh darn adorable it is instead.

Here are some of our favorite ways that our little ones mangle the English language:

At just two years old, our son obviously makes plenty of mispronunciations. But right now he has particular trouble with Fs – which is not exactly ideal for a kid named Freddy, but extra cute for us whenever he says “wog” for frog and “whuk” for fork. He has such a hard time with Ss that he avoids them altogether – so instead of saying his big sister Sammy’s name, he just calls her “big girl.”

Our four-year-old daughter has already corrected some of her most adorable mispronunciations, and we really miss some of her old classics, like “mintip” for minute, “compootoob” for computer and “dabootoob” for burrito. But she still makes a few mistakes that we’re cherishing while we can – as far as we’re concerned, she can call our living room the “litha oom” for as long as she wants.

What are your favorite mispronunciations that your kids say? Share them in the comments below!

Your kid talks funny, but not for long

An ‘Interview with a Toddler,’ with a good lesson for parents

2 replies on “Why mispronouncing words is good for your kid”

As much as she’d love to, E can’t say ‘big girl’ right.. So she keeps insisting that she’s a ‘dig girl’! (Which very much confused Sammy.)

[…] our last post, “Why mispronouncing words is good for your kid,” we talked about how flubbing up all sorts of speech sounds is a totally normal part of your […]