Want an easy way to get your kids to help out around the house more?

Of course you do. We all do. 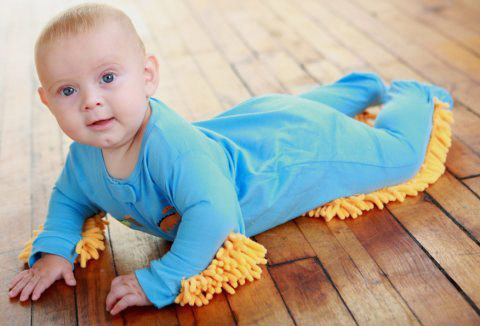 That’s why the Baby Mop exists. (Too bad it stops working as soon as your baby starts toddling.)

And for the life of us, we just can’t understand why they’ve yet to make a toy vacuum cleaner that actually vacuums. Your kid likes pushing that noisy, annoying thing around. How hard would it be to stick a dustbuster inside of it anyway?

Come on, capitalism. Get on the ball.1

So as we may have mentioned once or twice before, our house is constantly covered in kid – whether it’s their ever-multiplying hoards of toys or their never-ending streams of bodily fluids. And it seems like while we’re always cleaning, our kids are simultaneously always messing up the house even more.

Wouldn’t it be great if we could put our kids’ innate desire to destroy our homes on pause for just a minute or two – and get them to actually help out for a change?

A recent study says we can!

Researchers from UC San Diego, University of Washington and Stanford took a look at how kids’ helpfulness could be affected by the way adults ask them for help.

Across multiple studies, children were more motivated to lend a hand when the term “helper” was used.

Seems too good to be true, doesn’t it? How could the tiny, two letter difference between “help” and “helper” cause such a drastic change in kids’ behavior?2

The researchers who conducted this study reasoned that this minor manipulation in wording encouraged kids to help out because children (like adults) want positive things associated with them. Your little one is constantly trying to figure out who she is, and she will gravitate toward activities that will help her to build a positive identity. Although “helping” for helping’s sake isn’t so attractive, being a “helper” is motivating because it’s a good thing that your kid can be proud of.

First-borns are smarter Part 1: This cite is REAL!