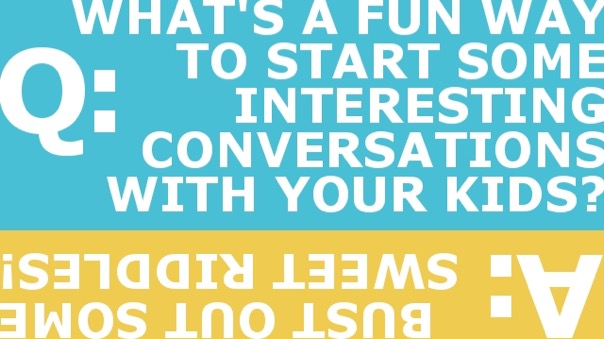 Remember trying to solve riddles back when you were a kid? No, not the riddle of how to tease your bangs taller than Lisa Turtle’s or how to do that two-man Kid N’ Play dance without falling flat on your face.

We’re talking about those brain-bending word puzzles that force you think about a problem from more than one angle – and sometimes for more than one day – until eventually, enlighteningly, you finally figure them out.

Now that you’re a parent, you can get a whole new perspective on riddles. Because riddles are not only amusing mental games – they’re also a great way to get into your kid’s head!

What They’ll Learn: Problem solving, flexible thinking, how to be playful with language

What You Need: Some riddles – read below for a few, get some books for more, or make up your own

How It Works: Ask your children a riddle, listen to how their fascinating little brains work through the problem, then have as much fun as possible talking about it

Here at The Doctor and The Dad, we’re always interested in getting to know how kids think. In fact, we wrote a whole book full of experiments that let you do just that. And it turns out that riddles are a great activity to add to your experimentation list, because they can generate some very interesting results.

Like the following riddle we posed to our then four-year-old daughter:

A father and son are badly injured in a car accident. They’re taken to the hospital and both are rushed into separate operating rooms for emergency surgery. The doctor operating on the father got started right away, but the doctor assigned to the son looked at him in surprise and said, “I can’t operate – that boy is my son!”

How can that be?

Got your answer yet? Because the next paragraph is a total spoiler.

This is a pretty tricky riddle for adults and kids alike. Researchers from Boston University found that only about 15% of people from age seven to adulthood came up with the correct answer that the surgeon is the boy’s mother.

This riddle is so tough because we have very strong, deep-rooted ideas about gender. Many of us learned very early in life to associate some occupations like surgeon and astronaut with men, and others like homemaker and teacher with women. In fact, if you changed this riddle from a father and son to a mother and daughter, and swapped the surgeon for a nurse, our gender biases would make it really hard for most people to figure out that the nurse was the boy’s father.

So what happened when we posed this riddle to our budding little thinker?

She answered “mother” right away!

Maybe she hasn’t experienced enough stereotyped examples of male surgeons yet, or maybe the times they are a-changin’. But either way, the riddle led us to have a really cool conversation about how most people get it wrong and why. What a fun way to address the sticky topic of gender stereotypes!

So if you haven’t experimented with riddling your child’s brain yet, give it a go! Find out how your kiddos respond to the doctor riddle above, or ask them any of the following brainteasers to get some really interesting (and educational) discussions started in your house.

When you’re all done, tell us about how it goes in the comments below! We’d love to hear what’s going on in your kids’ brains, too!

Q: What has hands but cannot clap? 1

Q: What gets wetter as it dries? 2

Q: What goes up and doesn’t come back down? 3

Q: What’s been around for millions of years, but is never more than a month old? 4

Q: What occurs once in a minute, twice in a moment and never in one thousand years? 5

Q: What can you catch but not throw? 6

Q: A man was driving his truck. His lights were not on. The moon was not out. Up ahead, a woman was crossing the street. How did he see her? 7

Playtime! Activity: Gettin’ Jokey With It

2 thoughts on “Playtime! Activity: Riddle me this”